Increased the Income of the Online Store Sibereon by 10 Times

Sibereon is an online store with products of its own brand Nisus for camping, fishing, hunting, and outdoor recreation. Market: the USA.

The client had good sales on Amazon and eBay before. During the next business development stage, they launched their own online store on the Shopify platform. For the first months, the store team was managing Google Ads on their own, but the sales volume was not satisfying. Then Sibereon contacted us.

We’ll run ads for your store, and you’ll be profitable in 60 days.

If you aren’t, then you’ll get the next month for free.

One of the most damaging and common technical mistakes is misconfigured conversion tracking or its full ignorance.

In our case, the settings were made, but incorrectly — the conversions were duplicated. If, for example, a sale was made, then Google Ads counted it as 2 sales. Firstly, it led to inaccurate reports and the fake impression of good results. Most importantly, auto-strategy advertising campaigns were optimized on distorted data, which also had a bad effect on the real result.

So first of all, we set up the correct events and user data-tracking by integrating the site, Google Ads and Google Analytics.

This allowed us to evaluate the effectiveness of each advertising campaign — whether the desired indicators and goals are being achieved. We also began to see the correct return on investment (ROAS) and cost per conversion (CPA) to find out if we were making a profitable investment.

But most importantly, by setting up the correct conversion tracking, we were able to launch ad campaigns using machine learning algorithms bringing the best results in online sales today.

The next step is to check the feed — a file with full products’ data, which is sent to the advertising systems. The advertising effectiveness directly depends on the method of its creation, completeness of information, and frequency of updates.

The client had the standard Shopify integration with the Merchant Center installed, which was good. But Shopify has many other feed creation and submission solutions with more advanced features.

We switched to the Feed For Google Shopping app. This is an inexpensive but functional solution. Here are some benefits we have received:

3. Fixed Bugs in the Merchant Center and Made a Number of Improvements

At the time of launch, 12% of all products were rejected. We eliminated all comments and went through moderation.

We have connected the Free product listings, recently released from beta testing. As a result, this source began to bring up to 5% of campaign revenue.

We connected the beta version of the “Buy on Google” sales system. We added an autonomous sales channel — the sale of goods is carried out on Google platforms without going to the website.

Configured additional attributes in ads: product rating, seller rating, special offers (promotional code for a discount), displaying discounted prices (old price / new price). This increased the credibility of the products and the attractiveness of the ads among competitors and increased the CTR.

Before the campaigns were relaunched, there were many attempts to get better results. We have tried such types of channels as Google Search, Google Display, DSA, Standard Shopping campaign, Smart Shopping campaign — all in different combinations and targeting settings.

At best all attempts led to expensive conversions, at worst — there were no conversions at all, just a waste of the budget.

Preparing for the new launch, we focused on the Google Smart Shopping campaign. This time we changed the strategy — we created all the conditions for transferring high-quality data in the required volume to advertising machine learning algorithms. We calculated the average cost per conversion (CPA) and set a daily budget that allowed us to get 10 conversions per day. If translated into a formula, then it looks like this:

We also set ROAS based on the actual average and business goals. After the launch, it was important to track the results and gradually make adjustments to the settings, or eliminate errors. For example, at some point, the conversion tracking tag went off. Therefore, it is always important to keep your finger on the pulse.

As a result, this campaign began to bring the highest sales volume among all advertising campaigns — 60-70%.

In addition to the Google Smart Shopping campaign, we have set up other campaigns, including Facebook ads and Microsoft ads (Bing).

In total, advertising sources of traffic began to bring up to 80% of the campaign revenue.

Accelerate your sales volume with thoughtful PPC management by Lira 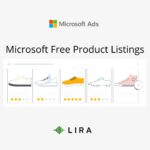 Microsoft Ads (Bing) Free Product Listings: What Is It & Why You Must Have ItJuly 18, 2022
How Fintech Startup Finom Expanded Into New MarketsJuly 22, 2022

Hi! I'm the Founder & CEO at Lira Agency. Welcome to our blog! Ask questions and share your insights in comments.

This website uses cookies to improve your experience while you navigate through the website. Out of these, the cookies that are categorized as necessary are stored on your browser as they are essential for the working of basic functionalities of the website. We also use third-party cookies that help us analyze and understand how you use this website. These cookies will be stored in your browser only with your consent. You also have the option to opt-out of these cookies. But opting out of some of these cookies may affect your browsing experience.
Necessary Always Enabled
Necessary cookies are absolutely essential for the website to function properly. These cookies ensure basic functionalities and security features of the website, anonymously.
Functional
Functional cookies help to perform certain functionalities like sharing the content of the website on social media platforms, collect feedbacks, and other third-party features.
Performance
Performance cookies are used to understand and analyze the key performance indexes of the website which helps in delivering a better user experience for the visitors.
Analytics
Analytical cookies are used to understand how visitors interact with the website. These cookies help provide information on metrics the number of visitors, bounce rate, traffic source, etc.
Advertisement
Advertisement cookies are used to provide visitors with relevant ads and marketing campaigns. These cookies track visitors across websites and collect information to provide customized ads.
Others
Other uncategorized cookies are those that are being analyzed and have not been classified into a category as yet.
SAVE & ACCEPT